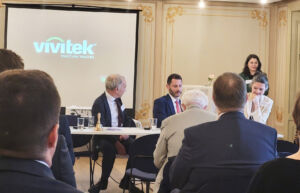 The 3rd joint biennial conference organized by the Stockholm Centre for Commercial Law (SCCL) and Oxford Institute of European and Comparative Law (IECL) took place on 2-3 June 2022 in Stockholm.
This edition of the Conference set to highlight the latest developments and trends in international commercial arbitration in light of the experiences gained during the pandemic, as well as to look at the future of investment treaty arbitration in Europe.

The Conference kicked off with the welcome addresses by André Andersson, Senior Adviser at Mannheimer Swartling and Chair of the SCCL; Ciara Kennefick, Associate Professor of Law at the University of Oxford and Research Fellow at the IECL, and by Axel Calissendorff, independent arbitrator, Chair of the Organising Committee, Head of the Arbitration Research Panel at the SCCL.

The first session of the Conference began with the keynote addresses of Christopher Vajda, QC, Monckton Chambers, Visiting Professor at King’s College, London, and previously UK Judge at the Court of Justice of the European Union (CJEU) 2012-2020, and of Robin Oldenstam, Partner at Mannheimer Swartling, Head of the firm’s International Arbitration Practice, Swedish member of the ICC Court of Arbitration 2015-2021, Chair of the Arbitration Institute of the Stockholm Chamber of Commerce. The panel of the first session lined up Veronika Korom, Assistant Professor at Essec Business School, France; Crina Baltag, Associate Professor in International Arbitration, Stockholm University, board member of the Arbitration Institute of the Stockholm Chamber of Commerce; Paschalis Paschalidis, Counsel at Arendt & Medernach, previously Référendaire at the CJEU, Associate Professor of EU law at the University of Lyon III Jean Moulin; and Lucy Reed, independent arbitrator based in New York and Hong Kong, and was moderated by Axel Calissendorff.

The first session was dedicated to investor-state arbitration, assessing the impact of the developments after CJEU’s Achmea ruling and the subsequent ones upholding Achmea, and considering the further effects these may have in the future. Christopher Vajda provided an overview of the CJEU case law, from Achmea to Komstroy. Robin Oldenstam’s keynote focused on the tension between treaty and commercial arbitration, and between public international law and EU law, noting that arbitral tribunals, generally, have not been persuaded to decline jurisdiction based on Achmea and have found no incompatibility between bilateral investment treaties (BITs) or the Energy Charter Treaty (ECT) and the EU law, as a matter of treaty interpretation. Veronika Korom began the panel discussion by addressing the future for arbitration investor state disputes within the EU, looking in particular at the termination of intra-EU BITs in the light of the Agreement for the termination of Bilateral Investment Treaties between the Member States of the European Union and at the set aside proceedings against intra-EU BIT arbitral awards. Crina Baltag continued the discussion by addressing the future of investment protection and arbitration in the post-Brexit UK, focusing on the relevance of the EU-UK Trade And Cooperation Agreement, as well as of the EU-UK Withdrawal Agreement. Continuing, Paschalis Paschalidis addressed the impact of the Komstroy ruling on the ECT and the international legal order, and highlighted that Komstroy left the other options for intra-EU disputes, i.e. the courts or administrative tribunals of the Contracting Party party to the dispute, or any previously agreed dispute settlement procedure, still available in an intra-EU dispute. Concluding the first session and the panel discussion, Lucy Reed addressed the views on investment treaty arbitration in Asia and the Americas, in the light of the intra-EU latest developments, and reminded all that there is a world beyond Europe.

The second session was devoted to “adequate dispute resolution”, which may include expert adjudication, early independent evaluation, and the use of technology in risk analysis. The session was moderated by Geneviève Helleringer, Lecturer in Law at the University of Oxford, Research Fellow of Lady Margaret Hall, Oxford, and Law Professor at Essec Business School, France. Sir Geoffrey Vos, Master of the Rolls for England and Wales, and author of a report for the EU Commission on mediation in ADR and in charge of designing the future of justice in the UK, gave the keynote address on the visions for a digital justice reform. The second keynote address was delivered by Catherine Kessedjian, Professor at the University of Paris II (Panthéon-Assas), Deputy Secretary General of the Hague Conference on Private International Law 1996-2000, on the new developments on mediation and settlements.

The panel discussion continued with Christopher Newmark, partner at Spenser Underhill Newmark, former Chair of ICC Commission on Arbitration and ADR, addressing mediation as a dispute resolution mechanism for the settlement of international commercial disputes, by emphasizing the fact that every dispute has certain moments in which a settlement can be pursued successfully. Representing the views of in-house counsel, Jonas Bengtsson, Head of Corporate Affairs at Polarium Energy Solutions, board member of the Arbitration Institute of the Stockholm Chamber of Commerce, continued the panel discussion by looking into various options available to users in commercial disputes, noting that some users may have a standard approach to disputes, while others would decide on a case-by-case basis.

The first day of the conference concluded with a dinner cruise aboard M/S Waxholm III, opportunity for Róbert Spanó, President of the European Court of Human Rights, to address the audience on Arbitration and Human Rights – Different Worlds?, which emphasized that arbitration and human rights frequently, if not always, interact.

The third session featured topical discussions on commercial arbitration, in particular on oral hearings following the pandemic experience, and visions for the future. Moderated by Christer Danielsson, Partner at Danielsson & Nyberg, former president of the Swedish Bar Association, the session began with the keynote addresses by Hilary Heilbron QC, Barrister at Brick Court Chambers, and by Professor Loukas Mistelis, Partner at Clyde & Co, and Clive M Schmitthoff Professor of Transnational Commercial Law and Arbitration. Hilary Heilbron focused on the opportunities for a re-think of arbitral procedure following Covid-19, and highlighted the preparation for the remote hearings, also in light of the digitalization of the dispute resolution process. Professor Loukas Mistelis addressed the oral hearing post-pandemic and the internal lex arbitri, by stressing that any question pertaining to issues of procedure, including of virtual hearings, must begin from the applicable lex arbitri.

In addressing the oral hearings with the vision on the future, given the lessons learned from Covid-19, the panel discussion lined up Rupert Choat QC, Barrister at Atkin Chambers, giving the international arbitrator’s perspective; Kristoffer Löf, Partner and Co-Chair of the Dispute Resolution Group at Mannheimer Swartling, giving the counsel’s perspective; Kristin Campbell-Wilson, Secretary General of the Arbitration Institute of the Stockholm Chamber of Commerce, on the institutional perspective; and Nicolas Martinez, Stockholm International Hearing Centre, on the ‘backstage’ of remote arbitration hearings. The panellists were in agreement that virtual hearings were implemented quickly and effectively, with now hybrid hearings benefiting from advanced technology.

The Conference concluded with lunch and guided tour of the National Museum of Art in Stockholm.